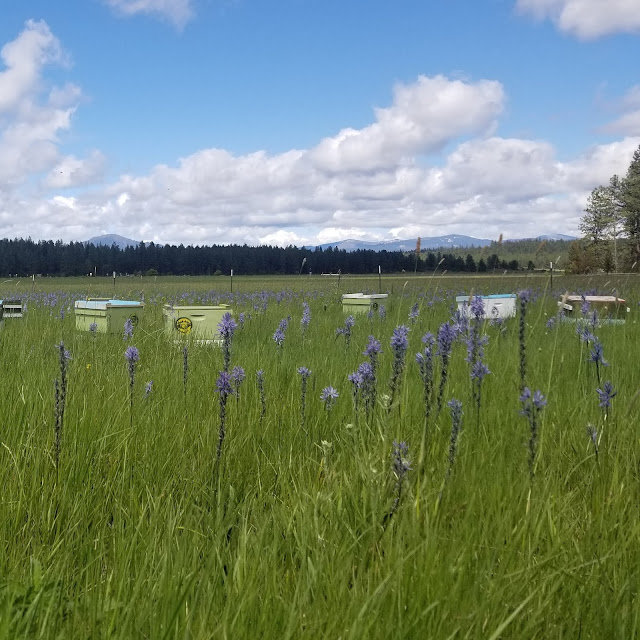 “What I saw was robbers, loading up on honey. Cool!”
-Dr. Thomas D. Seeley upon discovering robbers in a dead out from The Lives of Bees (Princeton University Press 2019)

Are your bees ready for winter? Here in Southern Oregon we are faced with many challenges that the beekeeper must overcome to successfully overwinter honey bee colonies. Most regions in this area don't experience a strong nectar flow, and winters can be unpredictable when it comes to rain, snow, and temperatures between fall and spring.

Having adequate food stores (honey and pollen) are paramount for healthy colonies to survive winter and emerge strong in spring. Depending on the region and the colony size our bees need between 40-90lbs (18-40kgs) of honey and plenty of pollen. Honey is needed to generate heat. Bees eat the carbohydrate-rich food source and vibrate their flight muscles to keep the cluster between 75-95° F (23-35° C) even when outside ambient temperatures are at 10° F (12° C) or colder. Pollen is consumed through the winter and early spring when the queen begins to lay eggs. I feed my bees heavy syrup (2:1 sucrose + water) as early as August continuing until September. When nighttime temperatures start dropping into the 40s (4° C) they stop taking syrup. If necessary I switch to a "dry" feed, typically fondant or fine granulated/inverted sugar. Colonies with little to no pollen stored on the combs are given pollen substitute.

It is crucial to monitor for mites and diseases long before the onset of winter. The bees your colonies raise in late summer are the bees who raise the winter bees, so their health is of prime importance. I recommend using either an alcohol wash or a powdered sugar shake on at least 10% of the hives in each apiary. I sample exclusively with the alcohol wash technique in my apiaries. This entails collecting ~300 bees (about a half cup), submerging them in alcohol (>90% isopropyl or denatured alcohol work well) in a mason jar with a fine screen lid, and shaking mites loose onto something white (I use a small plastic tub). Mites are counted to estimate the varroa population in the colony. Ten or more mites (≥3% mite load) in at least one of the sampled hives and the entire apiary is treated. If only the afflicted colony is treated than neighboring hives risk mite infestation from drifting foragers or drones, followed by reintroduction of mites to the treated colony. Whatever your method of control is, have a plan for what to do when mites are detected. A colony infected with mites in summer, however strong, may crash by the onset of winter.

Another technique for managing pests is to reduce the size of the hive by removing unoccupied boxes. In many instances by autumn the bottom box is devoid of bees, a perfect winter hideout for field mice. Mice chew frame, including the wood, and bring nesting materials (i.e. grass) into the hive. Removing this bottom box, which typically has a smattering of pollen but little else, eliminates the chance of a rodent stowaway. The frames can be exchanged with any foundation frames still occupying the remaining boxes. Reduced entrances and mouse guards will also help keep rodents out. Makeshift entrance reducers or mouse guards can be as simple as scrap wood or a piece of ¼” hardware cloth folded and wedged in the entrance,  respectively. Reducing entrances is also useful from summer onwards to help limit robbing by giving the bees an easier entrance to guard.

Occasionally you may have a hive with a partially drawn super, much of which may contain honey. In my apiaries, if the hives have the 40-90lbs of honey they need for winter in the lower boxes, I may remove this partially drawn box altogether. When that is not the case I will share food frames from colonies that have a surplus until all the foundation and empty comb is replaced with honey/pollen frames. Some colonies may be small and in some instances I may reduce the hive to a single deep. Wild or feral honey bee colonies nest in cavities slightly smaller than the volume of a ten frame deep, and when they are relatively free of pests and diseases, and having adequate honey stores, they overwinter just fine. Ideally, however, most hives will winter in a single deep and western (medium), or double deep boxes.

Considering the bottom board, I don’t have a preference between screened or solid bottoms. Screened bottoms allow water from rain or snow to drain freely while hives with solid bottoms benefit from being tilted forward slightly to avoid collecting water, especially solid bottoms with extended landings. Screened bottoms are more drafty so many beekeepers recommend closing them for the winter, although I have overwintered colonies in Southern Oregon with both types of bottoms with no notable differences.

Upon the onset of autumn I recommend avoiding breaking the propolis seal between the covers. This seal helps prevent water seeping in the hive. It is unlikely the bees will reseal the cover in the cool days of autumn. Vivaldi boards, if used, should be placed on the hives while the weather is still warm to give the bees the opportunity to seal them with propolis.

Ensure your hives have strong queens by summers end, if possible. Requeen from local mite resistant stock if possible and/or necessary. Queenless colonies may be combined with other colonies so long as they are free of mites and diseases. Discourage robbing as much as possible of dead or weak colonies. Honey frames from dead outs can be shared with healthy colonies but be weary of distributing brood from colonies that are suffering from mite infestations or diseases. It is likely that spores from virulent bacteria and fungi (i.e. European  foulbrood or chalkbrood,  respectively) are present in dying colonies to varying degrees, so it is likely that sharing brood from these colonies could infect otherwise healthy colonies. Mites can be spread to healthy colonies from robbing or shared brood from heavily infested colonies. Remove dead outs from apiaries as soon as they’re detected, and destroy any suspicious looking brood frames.

Tl;dr, keep healthy hives, monitor for mites, and reduce the volume of the hives! Do you have any tips or suggestions not mentioned here? Questions? Please share in the comments. Thanks for reading!